My daughter has a fascination with the toilet, but only the one at home. Something about throwing something into the porcelain potty, mostly one of her toys or her toothbrush, then pull the handle and watch it disappear. Is it the disappearing act that allures her? If so, I could pull up David Copperfield on youtube and have her watch him for a few hours. Or is it the sound of the water being sloshed around the bowl, before it is drained out, or watching the bowl fill back up with water again? I’m not sure what it is about the thing, but it seems to call her attention to it and for some reason, she has to throw something in and flush it down.

I usually come running once I hear the flush, only making it in time to hear her gasp and yell out, “Oh no, my toy!” I repeatedly tell her that I can’t rescue whatever it is that she flushed down the loo, it’s gone forever, but this never helps. It doesn’t help to put her in the sad spot (a certain spot in the house where she sits when she’s in trouble). I’ve put door knob covers on the bathroom door, but the door handle is too small for the cover and she can tear the cover apart.

Usually she’ll toss something into the loo that will pass all the way through, but there’s been a few times she’s thrown in something a little bigger that won’t fit through the loopty part under the bowl and becomes lodged, clogging it up. After having to remove the toilet from the floor a second time, I decided to buy a lock for the toilet itself. I just hope that whomever walks into the bathroom isn’t in a big hurry and let’s me give them a quick instruction on how to unlock the toilet so that they can use it. 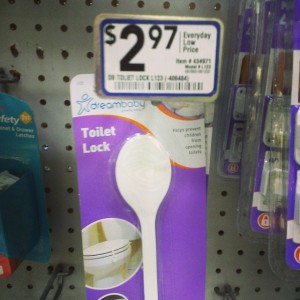 The first lock was a cheap ($2.97) latch that sticks onto the toilet bowl and lid. It was the only one this store had, so I bought it and took it home to try it out. You have to have the right toilet for this or it won’t stay stuck on the thing and even small hands could remove it without any trouble at all. My toilet wasn’t the right toilet for this one and I could NOT get the thing to stay on it, no matter where I placed the thing. Time to go to another store…actually, look online first, then go to another store. The second lock was just a little more pricier ($12), but it works. Plus, there’s no worry on whether someone forgets to lock the lock or not as it automatically locks itself back into place, the person who last uses the toilet just has to remember to shut the lid in order for said lock to do its job. 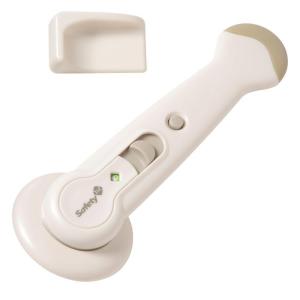 Time for a few test runs with the miniature version of me. Oh yes, she’s not called mini me for nothing, I’ve flushed my share of things down the loo, usually those things belonged to my mom, like her contacts for instant and in the early 80’s those things were pricey.

I was about to start cooking dinner, but decided it was time for her to sit on her little potty first. She’s still potty training. She sits down and I walk away, but casually peek around the corner and watch her with curiosity. I see her look at the big toilet and see that she notices the new lock I put on there. She reaches for the lid, but can’t get the thing opened. Suddenly, she glares at it, knowing her fun has been had. I giggled, did a mental jump for joy, then walked away. No more flushing things down the loo, no more calling family members over to unclog it. Maybe I can stop buying her toothbrushes in bulk. 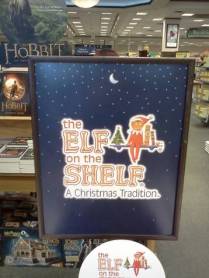 I went to Barnes and Noble yesterday…old habits are hard to break; it’s next door to Toys R Us, the place I was actually destined to stop. I walked around the shelves, stopping by the Science Fiction, as always, and found a few Doctor Who books, as well as a few Supernatural books (also a TV show; both are my favorites). I picked out a Doctor Who book and started to look for Torchwood, they had several books the last time I was here, but I wasn’t able to get one at that time. I looked all around and even asked, but no luck, they were only on e-readers. No worries, I’ll just check Amazon and see what I can find. 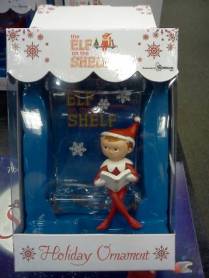 I continued walking around and ended up in the main center aisle where all the eye catchers are. Up front are the huge displays with the New Releases, then the tables with Best Sellers, and then the small tables with the holiday selections. I wasn’t interested in holiday selections, so I walked right passed it. Something familiar caught my eye. I turned, and there was a small display of the Elf on the Shelf. I let out a small laugh. There are two ornaments out for this little guy and two different books. I didn’t find the Elf on the Shelf itself, though I wouldn’t have bought it anyway, or would I? 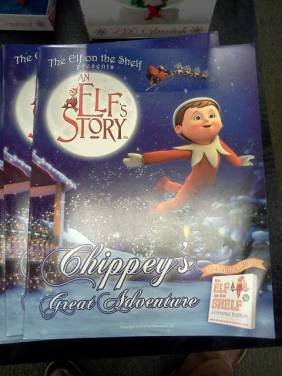 I’ve been reading about this little guy here and there and I know the Elf on the Shelf is supposed to keep an eye out around the house and report all naughtiness back to Santa, that’s the whole purpose. But, the funny stories parents share about the things they do with their Elf on the Shelf, had me laughing. Some share pictures, which were too funny. Some of them were like pulling pranks on their own kids. It’s almost better than watching the Jimmy Kimmel YouTube challenges. I thought to myself, how much fun this would be if I had more than one child. Actually, with my one child and the shenanigans she gets into, it would probably be a lot of fun…probably too much fun! My grandpa was well known for his practical jokes; maybe I too should get an Elf on the Shelf and have a few laughs myself. Many of my friends and some family members are getting one or already have one.