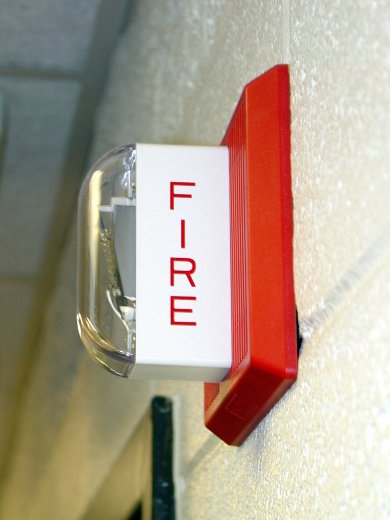 There’s a long list of things that my autistic daughter can’t handle – the washer, blender, vacuum, mixer, doorbell, fireworks, parades, crowds, fire truck sirens, and now the fire alarm at her school. A few weeks ago her school had a fire drill. In a typical fire drill, the fire alarm sounds and the teachers gather the students together to take them outdoors to safety. It’s something all school’s are required to do to teach the kids fire drill safety. But how do you have a fire drill for someone who is extremely sensitive to loud noises? Her therapist tell me to continue to expose her to this noise, so that she can get use to hearing it, to the point where it doesn’t bother her anymore.

I was told when they had their fire drill and what her reaction was – I already knew what her reaction would be before they told me, it’s the same reaction she has to a majority of  things she can’t tolerate. Since the fire drill she started having nightmares – getting up in the middle of the night, screaming and crying, then begging to sleep with me where she felt safer. Upon the fifth night I had finally discovered what had been giving her nightmares, it was the fire alarm. She had woke up crying in the middle of the night, telling me to get out, go, fire. When I told her therapist this they immediately began working with her and trying to help her see that she shouldn’t be afraid of the alarm. They even showed her videos and had another fire drill.

The second fire drill caused her to not want to go to her own bed at all and the nightmares continued. How would you try to expose a child to something that has them react in this manner? It’s the same as you or I being exposed to our own fears. Some fears there isn’t a choice but to be exposed to them. Like elevators for instance, I can’t stand elevators, though I have to use them. I was stuck in a crowded elevator when I was younger – I’m also claustrophobic, so this didn’t help me any. There were too many people (too much weight) in the elevator, that it decided to stop moving and we were stuck in between floors. It felt like we were in there a lot longer than it took them to get us out of there, but still I will till this day avoid going in an elevator if there is more than two people in it. If I’m already in the elevator and it starts to fill up, I’ll get out and wait on another.

I feel bad for my daughter and her sensitivity to loud noises. I wish there was a better way to being exposed to the things she’s terrified off. I have tried certain methods in having her get over some of the things she’s terrified of. Each time the doorbell rings I would have her go and ring the doorbell herself, to the point where she isn’t terrified from hearing it anymore. It startles her now and then, but not as bad as it had before. My grandmother and I do a lot of baking. We both decided to let my daughter stand in a chair next to us as we put stuff in the mixer, then turn the mixer on. This had eased my daughter’s reactions to the mixer so that she isn’t afraid of it when she hears it running. She’s now more anxious to scoot a chair next to us and watch as we mix ingredients.

Today I tried having her help me start the washer. She got as far as putting the soap in there, but wouldn’t get close enough to turn the knob that actually starts the washer. I’m not going to force her, instead I’ll take small steps.