Day three we went to Animal Kingdom. Again, we had to pay $14 to park, then took a tram into the park, dropping us off at the front entrance. My sister and brother-in-law and my daughter and I took our pictures standing in front of the big tree before separating to do our own thing.

My daughter and I went off to meet some Disney characters. We first found Donald Duck who was also near King Louie and Baloo the bear as well as Chip and Dale. Pocahontas has a spot in that area as well, but wasn’t going to show up until later. We met with Donald then decided to go find Mickey and Minnie.

After asking three different people their location we finally found them. I think it would be most helpful if Disney painted footprints on the footpaths leading toward the character locations. This would save time, frustration, and confusion. They were both inside an unmarked building. At least hang a sign on the wall saying this was where they were. Even though there was a Mickey mark on the map, it still didn’t help me find them.

We stood in line for a few minutes, snaking our way to meet the famous mice. Once my daughter got the sight of them she started shouting Mickey Mouse’s name in excitement. I had promised her for the past two days that we were going to go find Mickey, though it took us this long to find him. We started to make our way over to stand next to Mickey and Minnie, and my daughter started to cry. She loves Mickey and she is finally getting to meet him. We were able to get Mickey and Minnie’s autograph and our pictures taken and were off to find something else to do.

I started walking in the direction of the Rapids ride that I was wanting to ride, but first a stop for something cold to drink as it was really hot outside. After several minutes of waiting on my sister to come watch my daughter for me, I was off to ride the Rapid ride. I had a fast pass which helped me get through the line much quicker.

I continued snaking through the queue all the while watching the lady in front of my don a rain parka. Who goes on a wet ride on a hot day and wears a rain parka? Honestly, that’s cheating! Lol! To my surprise I was seated on the same ride as her. We rode all the way through the wild river, getting splashed here and there. I got a little wet, but it was the two people to my right that got soaked. The lady in the rain parka, didn’t even get sprinkled on, so my thought was that there was no need for it. Ah well.

I found my sister and brother-in-law and we made our way to the animal safari. I knew my daughter was going to enjoy it. We saw quite a few giraffes, her favorite, and a few elephants, rhinos, crocodiles, and hippos. We also saw at least a hundred turkey buzzards. Honestly, I’ve never seen so many turkey buzzards in one location in my life.

We finished the Animal Kingdom with a stop for lunch at the Rainforest Cafe, where we each got a military discount on our meals. The food was so good, the atmosphere was wonderful, and most of all my daughter was enjoying herself.

Next stop was Epcot. Since we had already paid $14 to park at the Animal Kingdom we didn’t have to pay the fee to park again at Epcot. Upon walking through the entrance there were two Disney characters standing in the shade, Daisy Duck and Goofy. Of course I had to go meet Goofy, he was my favorite! he was such a pleasure to meet and very funny to my daughter. I even got the chance to give him a big hug. 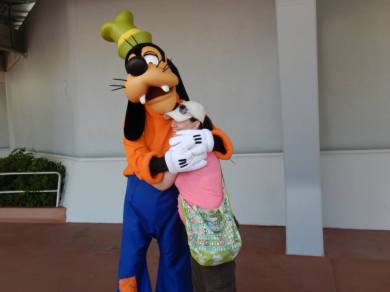 Once again my sister and brother-in-law parted my company, leaving me to find something for me and my daughter to do.

It had been a long, busy day and my daughter was beginning to get cranky. It was also hot and most importantly it was way past her nap time. We did manage to find the Nemo ride, which entertained her for a short while before I had to text my sister that I needed to head back to the hotel room to put my duaghter down for a nap.

If you decide to make a trip to Disney, make sure you add Animal Kingdom to the list. Go on the Animal Safari, you would enjoy it!