This week’s photo challenge is Blur.

I rarely keep a blurry photo, as I always go for the picture that has better quality. Usually my cell phone takes blurred images. Some are noticeable, while others aren’t as noticeable until after I’ve posted them on my FB or Instagram pages. However, this one is my favorite blurred image. It’s of my daughter, shopping for a comic book. She’s staring up at Hulk, her favorite superhero; there’s two different stacks of Hulk comic books so, she’s trying to decide which one she wants.

She loves superheroes and comic books. There’s a lot of girl’s who read comic books, they’re not just for boys. A few years ago she found my small stack of comic books; I had a huge stack of them, once upon a time, but they had gotten stolen while I was in the Navy. I found her thumbing through them carefully and mumbling intelligible words, which only had me believe that since she can’t read just yet, she’s making up her own story lines. Suddenly, I thought ‘maybe she would like to have them, if not help me pick some out that she would like’.

Now, when we go to Hastings, the only store nearby that has a large selection of comic books to chose from, she always asks if she can get one. Of course I say yes, it makes my little geek heart leap for joy. 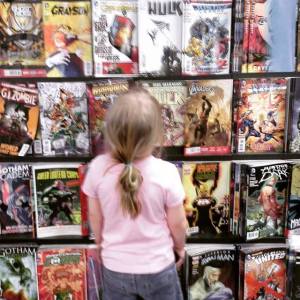 I can remember the first time I begged my mom to buy me a box of cereal. She relentlessly told me no, but I kept on and on, until she gave in. I honestly didn’t want the cereal, it was the toy that was inside the box that I wanted. She knew I didn’t like the cereal, that was why she kept telling me no. It was also the last time I would beg for a box of cereal too, as I sat at the table with a bowl of it in front of me for breakfast, lunch, and dinner. I’m not sure if they still make that particular cereal, but I hated it before I was forced to eat it – Sugar Crisp was what it was called, it had a bear on the front of the box. They also had another name for it, made by another company – Sugar Smacks, it had a frog on the front of the box.

A week ago I was browsing the cereal aisle for myself and for my daughter, when my eye caught Batman and Superman on a few of the General Mills cereal boxes. I looked closely and it said that there was a comic book inside each box. That inner child in me came out and I smiled so big. I had a few comic books growing up, but I didn’t really get into them until I was old enough to start buying them myself. I had quite a few of them too, though I don’t have them anymore as someone thought they needed them more than I did. I quickly picked out a few boxes. I was anxious to see my daughter’s reaction when I showed her one of the comic books I got out of the cereal box. She’s really into superheros and comic book movies, especially Hulk, Spiderman, and The Avengers.

I opened the cereal box, pulled out the comic book and took off the packaging that was protecting it. I handed it to my daughter, who took off with it. I followed her into her room and watched with delight as she was thumbing the pages carefully, looking over each page with curiosity. Later that night at bedtime she asked me to read it to her. My heart leaped with joy, why, sure I would.

A few days later we were walking around a book store when she noticed the comic books and asked to go down that aisle. I pushed the buggy into the aisle as we looked around, more specifically for something that might interest her. Her eyes quickly found the Hulk and so I gave her one to look at. She wanted me to read it to her right then, so I did. She had picked out three Hulk comics that she decided she couldn’t part with and I gladly bought them for her. As soon as we got into the car, she asked for them, and I happily gave them to her. I watched her for a few minutes as she opened one, turning the pages with that childlike curiosity. She still thumbs through them today, though she makes up her own story as she turns the pages.