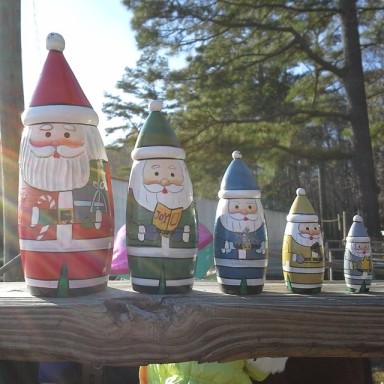 From my family to yours, have a very merry Christmas!

I’ve started to notice my daughter’s Autism progressing more. She’s more sound sensitive, even more scared of the washer, blender, and vacuum cleaner than she was before. The sounds of fireworks terrify her to the point she’s screaming with fright. She’s even more attractive to things with bright, flashing lights, like glow sticks or the light up wands you would find at Halloween or at concession stands at parades or carnivals.

Last night we had our Christmas parade here in Bryant, my hometown. I didn’t take her due to her reaction to the Christmas parade we went to in Benton the night before;  Benton is the town next to us. She showed interest in the floats, decorated with bright Christmas lights, with cheerful people waving and shouting ‘Merry Christmas’. My daughter cheered and waved back at each one as they passed by us. Then she started to push away when the band started coming near us. I calmly walked behind the crowd of people that was around us, but started to dance along with the band’s music, showing her that it was okay.

As soon as the band passed by I put her up on top of my shoulders, where she would sit for majority of the parade. She resumed her clapping, waving, and cheering at the brightly lit floats driving past us, until the motorcycles started to approach us. She started to scream and try to climb down from my shoulders. I cuddled her as best I could, trying to comfort her as she hid her head in my chest, covering her ears and whimpering. I placed my hand over her head, bringing her into my chest and covering her ears as best as I could, telling her all will be okay. The more the motorcycles revved up their engines, the more she stirred and cried.

I continued to stay at the back of the crowd, far from the parade procession. Though as each loud group that passed by us, I would put her back up on my shoulders so she could enjoy the rest of the parade. It was soon coming to an end and it was time for the firetrucks to make their appearance, followed by the fat jolly man on top of the last firetruck. It wasn’t hard to tell they were nearing as each one would blast their sirens, causing it to echo off of the buildings, making it sound louder and louder as the approached. It was our Que to leave.

I didn’t need to stay any longer to see Santa and I knew she could care less if he was approaching or not. It was the loud sirens that had her terrified and her wanting to leave. So leave we did. She loves firetrucks, has several firetruck toys at home. She just doesn’t like the loud sirens that they have.

Children don’t come with handbooks or manuals, nor does Autism. It’s all a learning process. A few years ago I had to learn from these similar reactions that fireworks aren’t something that we’ll be into viewing each fourth of July. Every fourth we’ll go to the carnival, but we return home way before the crowd shows for the fireworks display. I try to distract her with cartoons, puzzles, and games on her kindle as each whistle, pop, and crackle noise is made from the neighbors setting off their own little fireworks.

It was around Halloween last year that my daughter started getting into Spiderman. I had rented the newest Spiderman movie, The Amazing Spider-Man, and sat down to watch it with my little girl. A few days later we were strolling the costume aisles trying to find a costume for her. Since she hadn’t grown much, the choices of costumes was difficult. The only thing I could find for her were way too infant looking, but the ones that were supposed to be her size, should she have grown some, were way too big. We continued to walk around when she spotted a Spiderman costume. I had to politely say no, being the only girl to go trick-or-treating in a group with five boys, I wanted her to have a girly costume. Not to mention that Spiderman isn’t just my daughter’s favorite comic book hero, so there was a chance that one of the boys would be dressing up as him for Halloween. 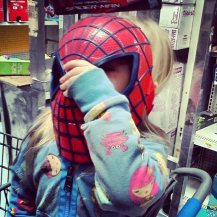 Instead of getting her the costume I bought her a Spiderman movie. Then for her birthday I got her a Spiderman toy. For Christmas a Spiderman cartoon on DVD. Several months later I was shopping for shirts and shorts for her, she spotted a Spiderman tshirt among other superhero tshirts. Since they were all in the little girl section I thought, why not. After all I liked Spiderman too.

I looked at my daughter with a frown and jokingly pouted, adding a dramatic sniffle. She turns towards me and gives me a worried look, “What’s wrong Mommy?”

“I’m afraid you don’t like Spiderman anymore,” I tell her, holding up the Spiderman tshirt.

She frowns along with me and says, “It’s okay,” then reaches ever so slowly for the Dora shirt I had laying on my lap. I sniff again for added dramatic effect and she stands up and gives me a hug, patting me on the back. I was biting my lip, trying hard not to laugh. She sits back down on her bed and I say, “I guess it’s goodbye Spiderman.” She didn’t reply, only put her Dora tshirt on and ran out of the room.

It’s amazing how quick kids can transition from one thing to another, how they can love one thing, then move onto something else. I had planned on making her a Spiderman costume for Halloween, though with an added tutu. I know she would’ve loved it. Now to figure out what she would prefer instead. I don’t know, maybe she’ll still pick a Spiderman costume, I guess I’ll just have to wait and see, Halloween is only a few months away.