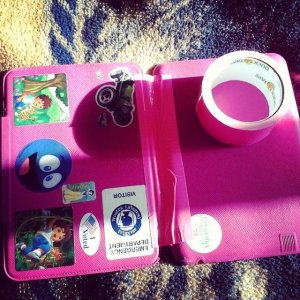 A few years ago I bought myself a Kindle HD Fire, hoping that it will help me with my studies. I was thinking of ways to save myself money by downloading my college books or other reading materials for my classes, though ebooks for college courses are not as cheap as I had imagined.

I also purchased the kindle during the time my daughter began her therapy sessions. My intentions were for me to use the kindle for school, but I didn’t have luck in way of obtaining WiFi coverage at the college I was going to, unless I could find one of the very, very few hotspots where I could use my kindle; so it was generally used at home.

During the summer months, I kept my daughter home, rather than put her in daycare. It saved me money, plus, I was home majority of the time and would rather spend that time I had with her. Since she wasn’t going to daycare now, her therapists began visiting her at home. Upon their many trips to my house, I noticed that they were using an iPad as a tool for part of her therapy. They showed me a few apps I could download for her that would be beneficial for her in OT.

Since I had a tablet, of the sort, I began downloading all kinds of free apps for her, to help teach her the ABC’s, counting, colors, shapes, all kinds of helpful learning apps for children her age. At that moment, my kindle became her kindle and has been ever since. It’s encased in a pink hard leather case, decorated with many stickers from our trips to the ER or doctor visits, though some of those stickers have since been ripped off. The kindle has been a treasured item for my daughter, who is easily bored when there isn’t any form of entertainment for her.

Flash forward a few years and to the present…it’s endured water, juice, and milk submerges; many drops to the floor (carpet and concrete covered); a near attempted meeting with the toilet; an almost attempted dunk into the Arkansas River, landing in the muddy river banks; a trip to Disney World, followed by a trip to the beach; a couple of family reunions during the hot summer days; and many roads trips thereafter and is still working. Only once had I taken it back to Best Buy, where I had purchased it, for a reboot, but it has been one tough piece of wonderful electronic device I had ever purchased and to have survived my five year old for the past three years plus.

Though, yesterday, the wonderful case which holds the kindle from meeting its dreadful doom, finally met its match…a pair of scissors. Those scissors are usually kept up high, so that tiny little hands can’t reach them. Those scissors have chopped bangs a tad bit too short, chopped up a tail of a stuffed dinosaur, chopped hair off a stuffed Pegasus to mimic a horrible mullet. Yes, those scissors have many reasons to be kept put away…in a safe place…until yesterday, when someone left them lying on the kitchen table, where they were being used to cut quilting fabric.

Mini me came running into the office, holding her kindle, still encased, though now in two pieces. My first reaction ‘Man, it finally ripped right in two’. Then, the careful learned forensic archaeologist that I am studying to be, looked carefully at the hard leather case and saw cut marks…this pattern looks strangely familiar. I didn’t get mad. The sad eyes I was given, followed by, “I’m sorry, Mommy” would only soften anything I would think to say, other than, ‘Where are the scissors?’

I followed her into the kitchen, took the scissors left lying on the kitchen table and put them back in a safe place. Then went to find my roll of duct tape, which coincidentally is the same color as my daughter’s kindle case. Duct tape, pink or any other color, can fix anything, including her kindle case. She just happened to have cut the case along the fold, allowing me the chance to save it, whereas, the many other things that she’s broken had not been savable.  But on this occasion, it was. And once again, I’m the Superhero Mom, whose daughter is now toting a kindle, whose case is held together by pink duct tape.