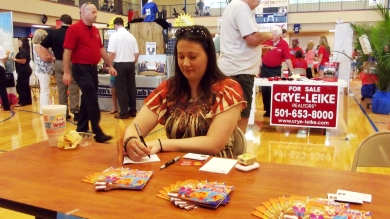 Tuesday night was a very busy night. I set up a booth for a book signing at the Taste of Bryant event that drew a crowd of almost 900 people. A few of those people even included some politicians. At least three of those politicians stopped by my booth and chatted with me. One politician, Asa Hutchinson, Republican candidate for Arkansas Governor, chatted with me and bought one of my books for his grandchildren. It was an honor to have met him in person and have a chance to chat with him for a few minutes. He is really a great guy!

The Taste of Bryant seemed to have been a popular event as I watched a constant flow of people visiting each vendor table. The aroma of BBQ, salsa, coffee, cooked meats, and other spices nearby only teased my senses, drawing even my attention to the vendor tables. My mother, who joined me for the event, continued to bring back samples of food from each vendor, telling me how delicious each one was. She brought back a few samples for myself, one of which was chips and dip from Moe’s Southwest Grill. The cheese dip and salsa was a little spicy, but it was really good!

The crowd was finally starting to dwindle and it was time to pack up and leave. I enjoyed chatting with everyone that visited my booth. It was a successful night for the Taste of Bryant, including myself as I sold a handful of books. I’m looking forward to setting up a booth at the next big event in September.